The Straw Hat Pizza Cooperative announced today that it was implementing a voter registration program to encourage it’s many younger guests to participate in this year’s presidential election.

Straw Hat spokesperson, Kevyn Johnston, said Straw Hat has long supported “getting out the vote” when, in the 70’s, the company offered discounts to those patrons showing they had voted. “We reworked the idea this year because there is so much interest in getting out the vote,” said Johnston, “and Straw Hat is a favorite place for young people. We want to encourage them to vote; many for the first time.” 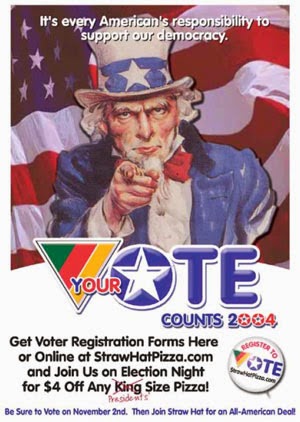 “I think any time the message gets out about how important it is to vote is a great thing.” said Joshua Richman, president of Straw Hat, “We view this effort as a natural continuation of our other community based programs, something Straw Hat has long been proud of.” “Whatever the outcome of the election, our democracy is strengthened when more Americans vote” said Richman.

[SHCC licenses nearly 50 Straw Hat Pizza locations in California & Nevada. The “Cooperative” is solely directed by its membership and has been called “the un-franchise, franchise.” It provides the benefits of a franchise system, however, its individual owners enjoy greater control, and corporate overhead is kept to a minimum, (about 1/3rd of the average franchise fee.)]