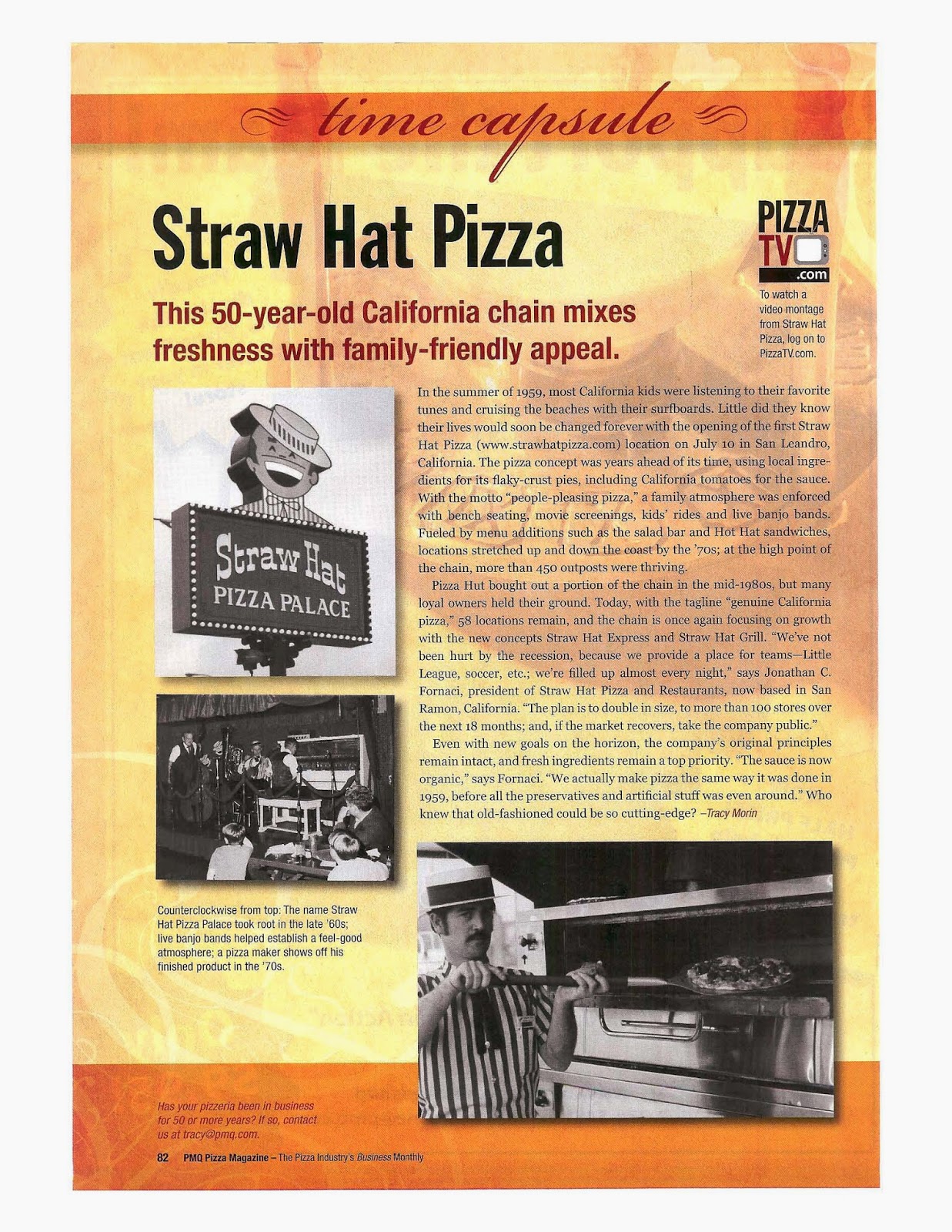 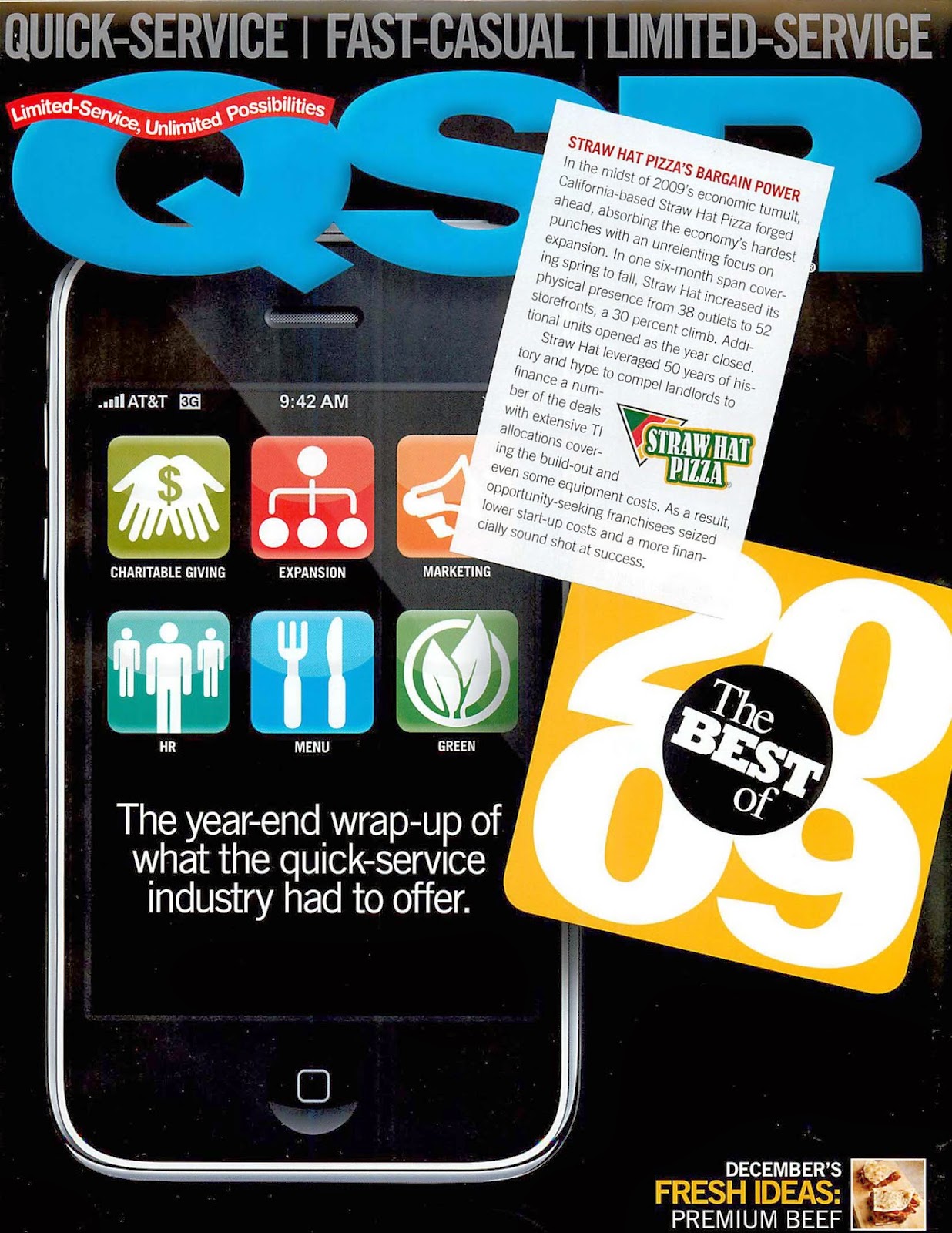 Last month, Straw Hat Restaurants was named "2009 Pizza Industry Enterprise Award" winner, over Little Caesar's and Famous Famiglia. The chain also was named the 5th top fastest-growing restaurant company on a team of rising-star chains with sales between $25 million and $50 million, according to Technomic Inc. The "Technomic Top 500 Chain Restaurant Report" is the most comprehensive ranking, analysis and overview of the U.S. chain restaurant industry.

Celebrating its 50th anniversary in 2009, Straw Hat has long held to its original family-friendly, community-focused, California pizza concept. It's a strategy that's served the company well, especially during the recession, says president Jonathan Fornaci, who was brought on in 2006 to kick-start growth. The 63-unit San Ramon-based chain grew its sales to $40 million (up 50.9 percent) in the last year. Aggressive expansion plans also are slated to roll out in the next two years. Fornaci is taking Straw Hat outside of its West Coast territory to expand nationally and internationally. Within two years, it should reach 150 restaurants.

"We are especially honored to receive these awards, because they speak volumes about our determination to meet the needs of the American family and offer them a place to gather and dine, especially during these difficult times," says Fornaci. "During a year in which restaurateurs and entrepreneurs were advised to wait until the economy improved, we were able to sign on many new owners who saw immediate success in their investments."

Once touted as California's largest pizza chain, Straw Hat sold many of its stores, in the late 1980s, but now is aggressively ramping up again. One of its success strategies in 2009 was to introduce two new versions of that build on the original concept: A new cost-efficient "Express," which is aimed at the carry-out and delivery business; and The Straw Hat Grill, an upscale version of the pizzerias, offering an expanded menu, including the signature Straw Hat pizza along with gourmet versions and toppings alongside burgers, pasta, specialty salads, steaks and Straw Hat's own BBQ Ribs.  Begun in 1959, Fornaci says that the 100 percent franchised company runs only one corporate store, dedicating all of its energy to helping its franchisees.

"We hold extensive training programs and send out separate teams that help with marketing and sales," he says. "We use a national distributor that helps guarantee that everything is fresh; our dough is made every day in the stores, vegetables are cut fresh, and because we've used the same recipes for 50 years, none of our menu items have ever contained trans fats."

Because Straw Hat is a family-oriented pizzeria, it has fared especially well during the recession.

"Even during a recession, people will not stop having parties for their kids," says Fornaci. "We've always offered a family fun place—focused on family and good food—with a party and game room."

And while every Straw Hat store carries the California theme throughout its interior, nothing has stopped the company from expanding into new territories and taking a little bit of the Golden State to other parts of the country. Straw Hat, which has historically been in California, is embarking on a national expansion to Arkansas, Arizona, Florida, Oregon, Nevada, New Jersey, Texas and beyond.

"No matter which state we choose to offer franchises in, we'll always stick to Straw Hat's family fun concept and its California theme," says Fornaci.

Founded in 1959, Straw Hat Pizza is the originator of "Genuine California Pizza," and is comprised of 63 locations in California. Straw Hat is poised for rapid growth in the U.S. The franchise recently was awarded the prestigious seal of Fair Franchising by the American Association Franchisees & Dealers (AAFD) and awarded "hottest franchise" by America's Hottest Franchise. For more information please visit: strawhatpizza.com/contactus and please follow us on Facebook & Twitter @StrawHatPizza.
Posted by Straw Hat Pizza at 12/04/2009 09:31:00 AM No comments: