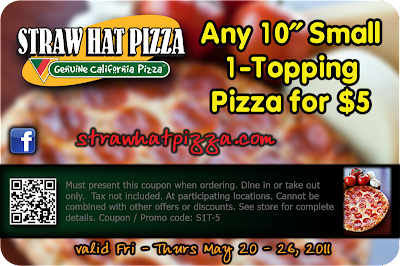 (Click on the image above to enlarge)
Purchase any 10" Small 1-Topping Pizza for only $5!
Valid Friday - Thursday May 20 - 26, 2011
Must present the coupon (image) above when ordering. Dine-in or take-out only. Tax not included. At participating locations. Cannot be combined with other offers or discounts. See store for complete details.
Coupon / Promo Code: S1T-5
strawhatpizza.com
Posted by Straw Hat Pizza at 5/20/2011 10:03:00 AM No comments:

NEW MENUS, NEW DECOR and new restaurants - these may be Straw Hat Pizza's very best toppings yet. The San Ramon, Calif.-based company, which has served up "California" pizza (billed as light and fresh, with a crispy crust) since 1959, is in expansion mode. The expansion may seem somewhat phoenixlike, given that the company's corporate-owned stores disappeared into Pizza Hut in a 1987 acquisition. Straw Hat's franchisees, however, would not sell, choosing to keep the brand. In 2008 they hired Jonathan Fornaci to expand the business nationally, as president of Straw Hat Cooperative Corp. Fornaci is doing just that. The company went from 45 franchises in 2008 to 81 as of mid-March and has pushed beyond California into nine more states. Fornaci says he hopes to have 106 restaurants by year-end and as many as 225 by late 2012.

The expansion is fueled partly by landlords' willingness to pay the buildout costs and partly by the chain's own willingness to lower franchisee costs from about $350,000 a few years ago to $150,000. Straw Hat likes big shopping centers and open-air centers, and it prefers perimeter or end-cap spots rather than being buried inside an enclosed mall, like a food court tenant would be, Fornaci says.

Pizza still accounts for 72 percent of sales, though Straw Hat has also been offering stuffed sandwiches and other fare for years. And beginning with its first Texas restaurant, which opened in December at The Pines of Flower Mound, Straw Hat introduced an even broader menu that includes grilled items such as burgers and allows for such toppings as grilled shrimp. Straw Hat also has a self-serve frozen-yogurt shop it calls Tower 27, for the logo of a lifeguard towern surrounded by 27 yogurt toppings, operating next to the main restaurants. These yogurt bars are inexpensive to operate and bring in traffic in the afternoons, before the dinnertime pizza orders start cranking up, Fornaci says.

Such menu diversification is not without risks, sources say. "You lose some of the brand clarity when you expand the menu," said Darren Tristano, executive vice president of Technomic, a Chicago research and consulting firm that ranks U.S. food chains by sales. "But demand is demand." If sandwiches and wings sell, a pizza chain is smart to offer them, but pizza, especially cheap pizza, is good money now, he says. Domino's revenues rose 12 percent year on year for 2010. So Straw Hat should watch prices, but "chains looking to go from regional to national have a big opportunity," Tristano said.

The combination of a diverse menu with family entertainment can be effective, says T ristano, and few pizza chains offer that. Straw Hat serves wine and beer and has private party rooms. The restaurant rL'Clesign includes TV screens in the booths, equipped to accept memory cards from home-video cameras for viewings of family. recorded Little League games and the like. Straw Hat appears to be affordable enough, and the children can be entertained while their parents enjoy some wine. "Four people can get appetizers, pizza and drinks for $25," said Fomaci. "Weekends we have the Wii hooked up to the TVs."

In many markets Straw Hat must contend with Domino's, Papa John's and Pizza Hut, plus numerous regional players and countless mom-and-pop takeout joints. But you can't take a Little League team to Papa John's after the game, given that chain's takeout emphasis, and few mom-and-pop zerias have party rooms.

As for quality in the ingredients, says Fomaci, Straw Hat makes its tomato sauce in-house from California tomatoes. Wheat for pizza dough comes from farms that grow it exclusively for Straw Hat, and the cheese comes from California cows. Ingredients, save those for the salad bar, are distributed to all the franchises so that the quality might be uniform across the chain. These innovations and distinctions are yielding strong sales: Revenue reached $55.4 million last year, up from $43.8 million the year before.

Straw Hat is building a restaurant at Shiloh Crossing Shopping Center, in Billings, Mont. "The franchisee is extremely well qualified," said Steve Corning, president of the center's landlord, Corning Cos. "Also, their format and price point work well with our market."

The economy being what it is now, Fornaci says he is glad that Straw Hat is a family destination first and a pizza joint second. After all, he said, "people will give up a new car, but they won't tell the kids: 'No pizza after Little League.' "

View the article below: 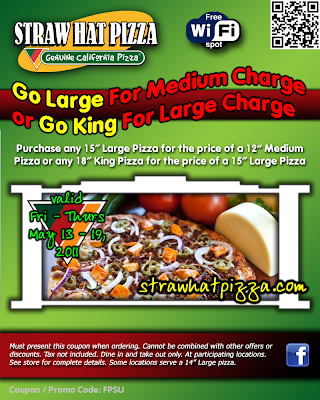 Valid Friday - Thursday May 13 - 19, 2011
Purchase any 15" Large pizza for the price of a 12" Medium pizza
~ or ~
Purchase any 18" King pizza for the price of a 15" Large pizza
Must present the coupon above when ordering. Cannot be combined with other offers or discounts. Tax not included. Dine in or take out only. At participating locations. See store for complete details. Some locations serve a 14" Large pizza. Some locations do not offer Free Wi-Fi. Coupon / Promo Code: FPSU
Posted by Straw Hat Pizza at 5/16/2011 12:05:00 PM No comments:

We are happy to announce the newest Straw Hat Grill restaurant in Stateline, NV (South Lake Tahoe) opened its doors on Wednesday May 11, 2011 in Harvey's Hotel & Casino!

Virtually the same as a Straw Hat Pizza restaurant, Straw Hat Grills includes an expanded menu including traditional American favorites such as hamburgers, cheeseburgers and additional gourmet pizzas sure to please everyone in the family.

Take a look at the new location by visiting the corporate webpage at this link.

Fill out an application, dress appropriately and know the job you’re applying for. 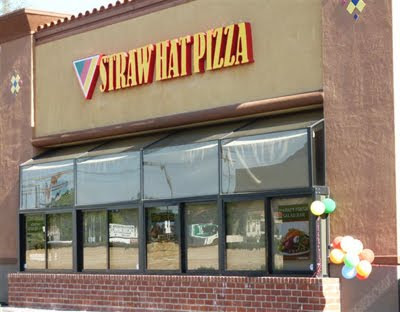 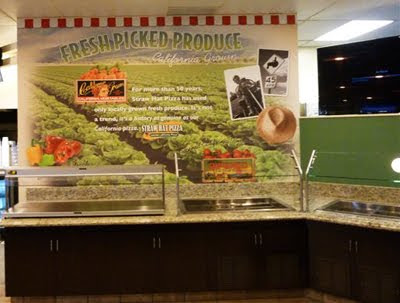 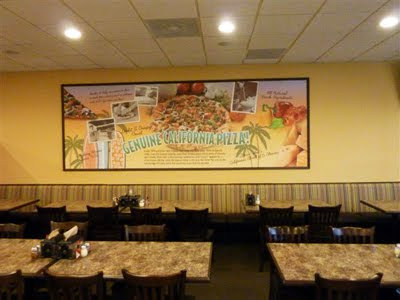 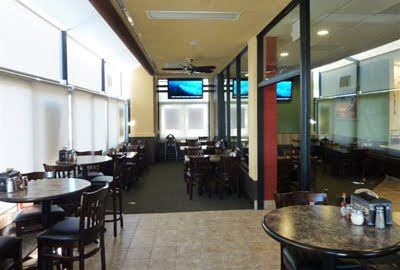 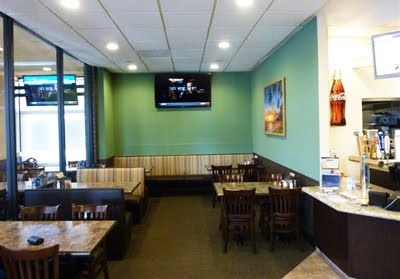 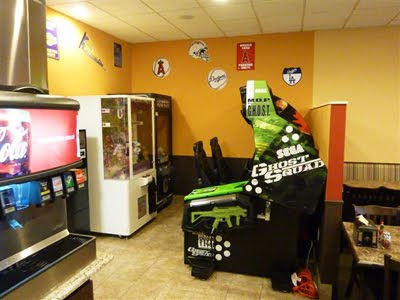 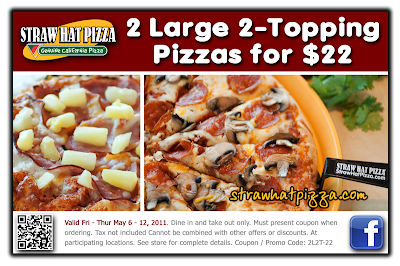 Two 15" Large 2-Topping Pizzas for $22
Dine in and take out only. Must present coupon when ordering. Tax not included. Cannot be combined with other offers or discounts. At participating locations. See store for complete details. Some locations serve a 14" Large Pizza. Coupon / Promo Code: 2L2T-22
strawhatpizza.com
Posted by Straw Hat Pizza at 5/05/2011 10:48:00 AM No comments: 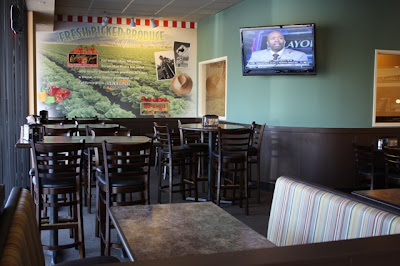 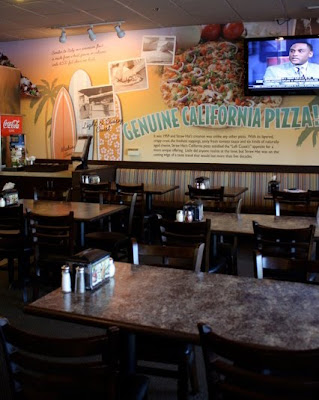 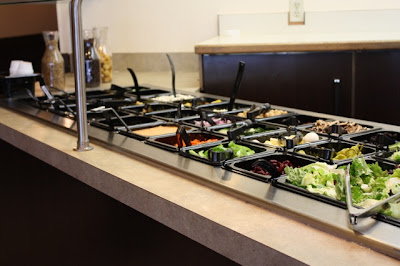 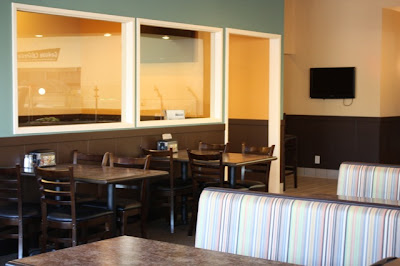